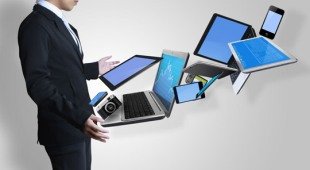 By James Bourne | 23rd April 2013 | TechForge Media http://www.cloudcomputing-news.net/
James is editor in chief of TechForge Media, with a passion for how technologies influence business and several Mobile World Congress events under his belt. James has interviewed a variety of leading figures in his career, from former Mafia boss Michael Franzese, to Steve Wozniak, and Jean Michel Jarre. James can be found tweeting at @James_T_Bourne.

The LinkedIn Information Security group has conducted a survey of its members, and found that employee satisfaction remains the number one driver of a personal device policy, as well as concluding that iOS is the number one BYOD platform.

Reponses from the 160,000-strong group owned by Holger Schulze has resulted in the BYOD & Mobile Security report, and has come up with five main takeaways:

This all seems fairly straightforward, but other research backs it up.

Earlier this month Citrix, in its Enterprise Mobility Cloud Report, proclaimed Apple’s OS as the enterprise mobile platform of choice, whilst a recent figure from Quest stated that nearly three quarters (74%) of employers think BYOD makes their employees more productive, with 57 minutes per day on average being reclaimed per worker.

In terms of security, data loss is the number one BYOD risk according to 75% of respondents, followed by unauthorised access to company data (65%) and fear of malware infections (47%). Earlier this year the Cloud Security Alliance (CSA) cited data breaches and data loss as the most worrying aspects of cloud security for 2013, so it’s certainly on a lot of people’s minds.

But what do the security threats mean in terms of practicalities? Aside from the need for additional IT resources, disrupted business activities, reduced employee productivity and the sheer cost in cleaning up malware infections were also cited.

Back in February, a joint report from iPass and MobileIron argued that BYOD was making IT’s job tougher, with just under half (46%) of respondents claiming that employees needed more IT connectivity support with the advent of bring your own device.

The research also examined the solutions companies were adopting to stop security problems in their tracks.

Perhaps unsurprisingly, mobile device management (MDM) tools were most popular, cited by 40% of respondents as the most frequently used solution. This was followed by endpoint security, network access controls (NAC) and endpoint malware protection. Worryingly however, a whole 22% of organisations stated they didn’t have any tools to govern mobile devices.

The full report can be found here. It’s difficult to imagine companies not being clued up on the risks of mobile security and BYOD – especially if the latest Android malware, BadNews, is anything to go by – but are you still scared of bring your own device? And does this research dispel those fears?